PLEASE NOTE: Bear market rallies, including the most recent, which resulted in the S&P 500’s highest close since February 16, 2022, on Friday March 18th, should be utilized to reduce risk and generate cash.  Hedges should be deployed including the Bull & Bear Tracker which gained 6.79% vs. a S&P 500 decline of 8.39% for the first two months of 2022.  Based on the index’s performance for all prior secular bears since 1929, the S&P 500 will:

The January 4th high prediction is based on the findings from my empirical research of the S&P 500’s Basic and Shiller PE multiples at the index’s extreme cyclical and secular highs from 1929 to 2022.  The research resulted in the following discoveries and the development of the first ever PE multiple which adjusts for inflation and deflation:

The parameters to identify the S&P 500’s extreme cyclical and secular highs and lows which qualified for the empirical research of the S&P 500’s PEs are as follows: 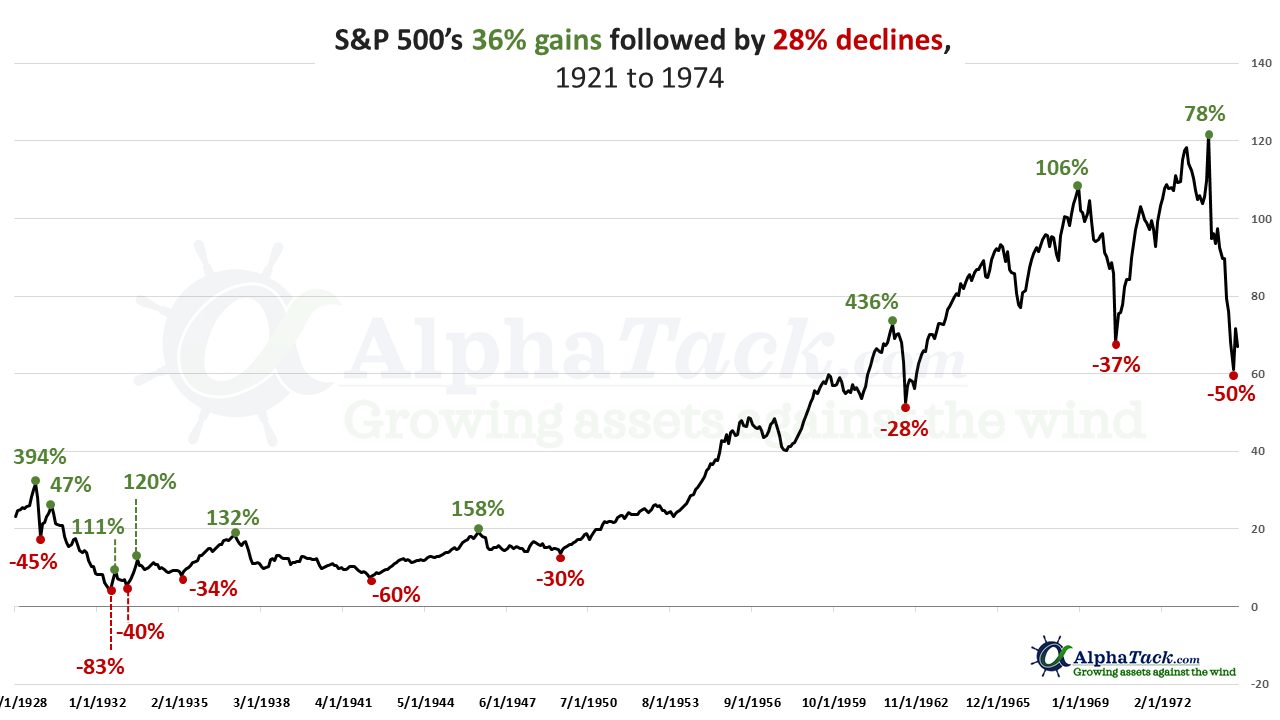 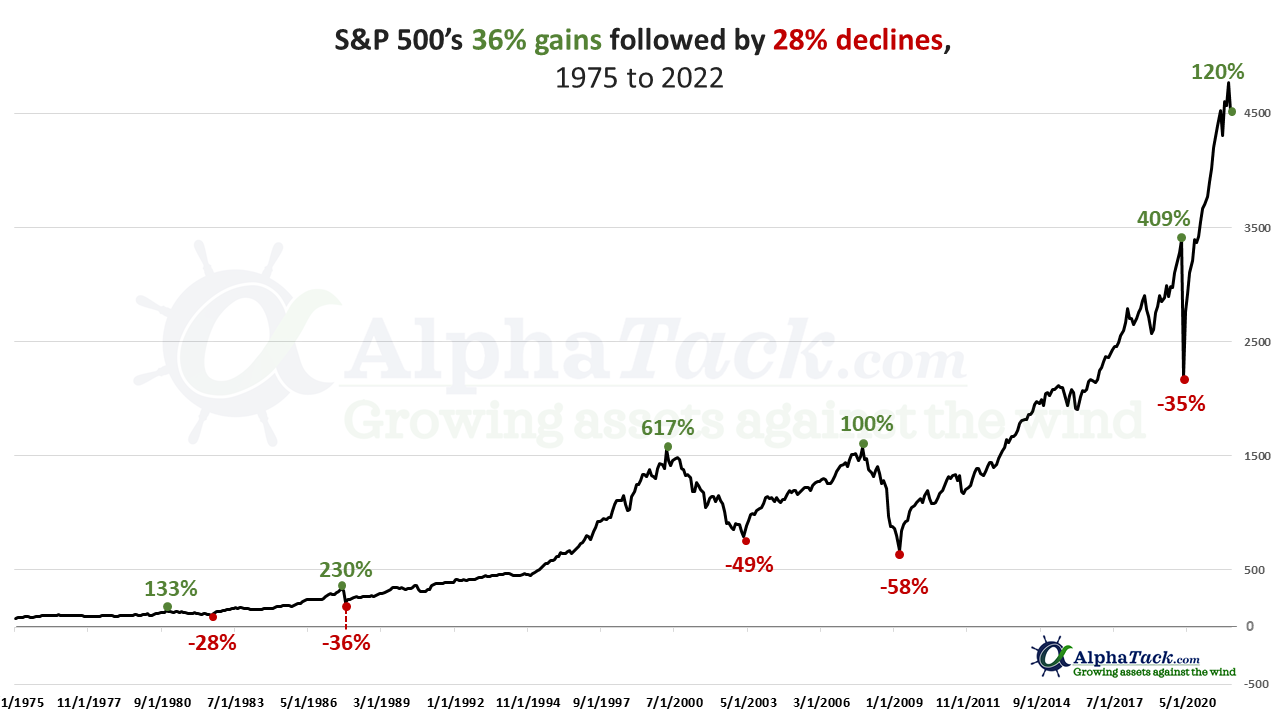 Discovering that the basic PE multiple is of little value was not a surprise.  I had concluded back in 2002, from my post mortem of bankrupt Enron’s Financial Statements, that EPS (earnings per share) was an unreliable indicator for determining the value of a share or the financial condition of a company.  Please see, “High Concept: How to Spot an Enron”, Kate Sullivan, November 2022, Inc. Magazine.

Yale Economics Professor and Nobel Laureate Robert Shiller also had concluded that the basic PE was insufficient.  He created the Shiller PE for the S&P 500, which is more reliable than the Basic PE.  However, after analyzing Shiller’s PE, a deficiency was discovered.  The Shiller PE multiple does not adjust the multiple for inflation or deflation.

Shiller, instead of adjusting the PE multiple, adjusts a business’ earnings, the PE’s divisor for inflation or deflation.  The adjusted earnings are then utilized to compute the multiple.  The problem with adjusting the earnings up or down is that the impact on a share multiple is nominal.  For example, $1.00 per share of earnings in a 10% inflation or deflation environment is adjusted to either $0.90 or $1.10 by Shiller.  Thus, Shiller’s method for calculating a multiple suppresses PE multiple volatility.

Another rule, the Rule of 20, was developed in the 1970s to adjust for inflation or deflation.  Under the rule, the inflation rate is added to and the deflation rate is subtracted from the basic PE.  See also Yahoo Finance:  “You’re probably using P/E ratios incorrectly”, Sam Ro, July 18, 2016, Yahoo Finance.  For example, if the shares of a company growing at 10% trade at a PE multiple of 10 in an economy which has 5% inflation, the net PE multiple would be 15.  It’s because half (5%) of the company’s 10% earnings growth is derived by inflation and not organic growth.  Thus, the rate of inflation must be added to the PE multiple for a company or an index.  Conversely, a business, with a PE of 5 growing at 5% in an economy with 10% deflation, the rule equivalent net PE multiple would be −5.  The multiple would be negative since the deflation rate is subtracted to calculate the actual multiple for the shares.

The conclusion, from my research of the S&P 500’s Basic and Shiller PE multiples and consumer price index dating back to 1872, was periods of high consumer price index (CPI) volatility (sustained periods of inflation followed by sustained periods of deflation) highly correlated with severe stock market volatility.  Since neither of the multiples addressed the inflation/deflation issue, the AlphaTack PE multiple (AT/PE) was developed to fill the need.  The AT/PE utilizes the average of S&P 500’s earnings for its prior 10 years to compute its base multiple.  The percentage increase in the monthly CPI or inflation is then added to the AlphaTack core PE to compute the AT/PE.  The percentage decline in monthly CPI or deflation is subtracted from the AlphaTack core PE.  The AT/PE is the only PE which adjusts the PE multiple for inflation or deflation.

The table below contains the average highs and lows for the AT/PE, Shiller and Basic PE multiples at the S&P 500’s qualifying extreme lows and highs from 1921 to 2022. 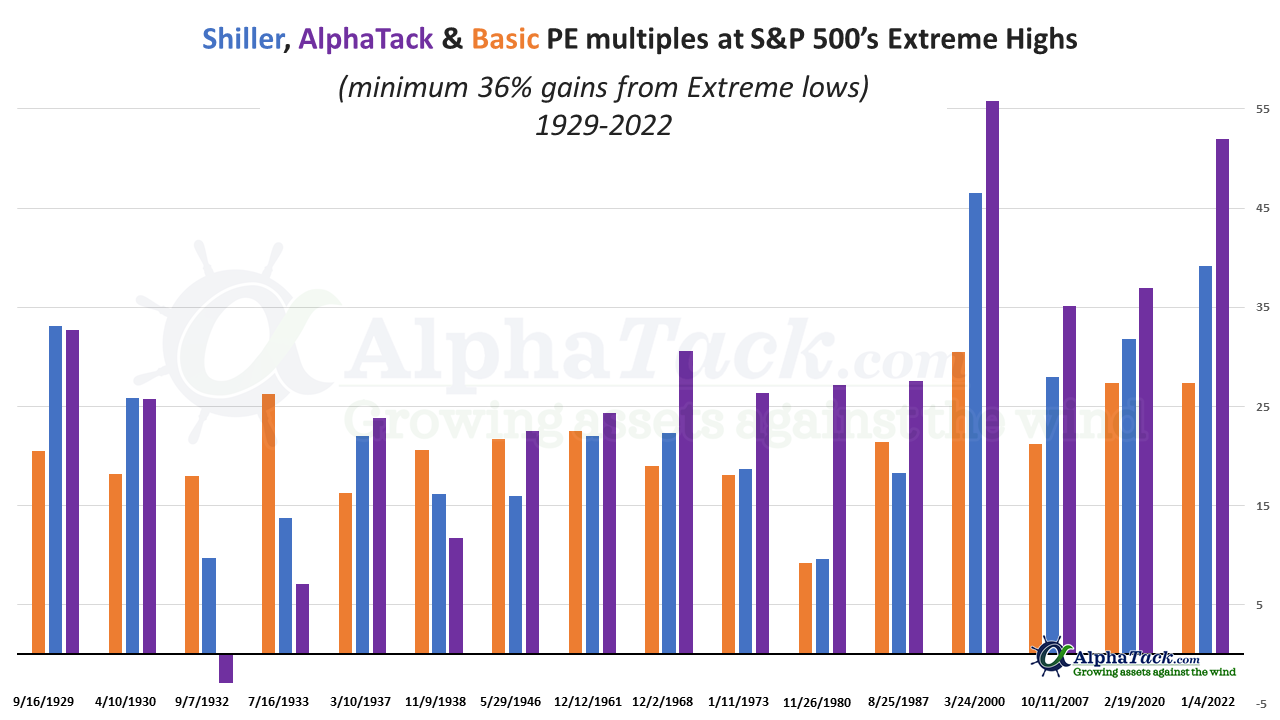 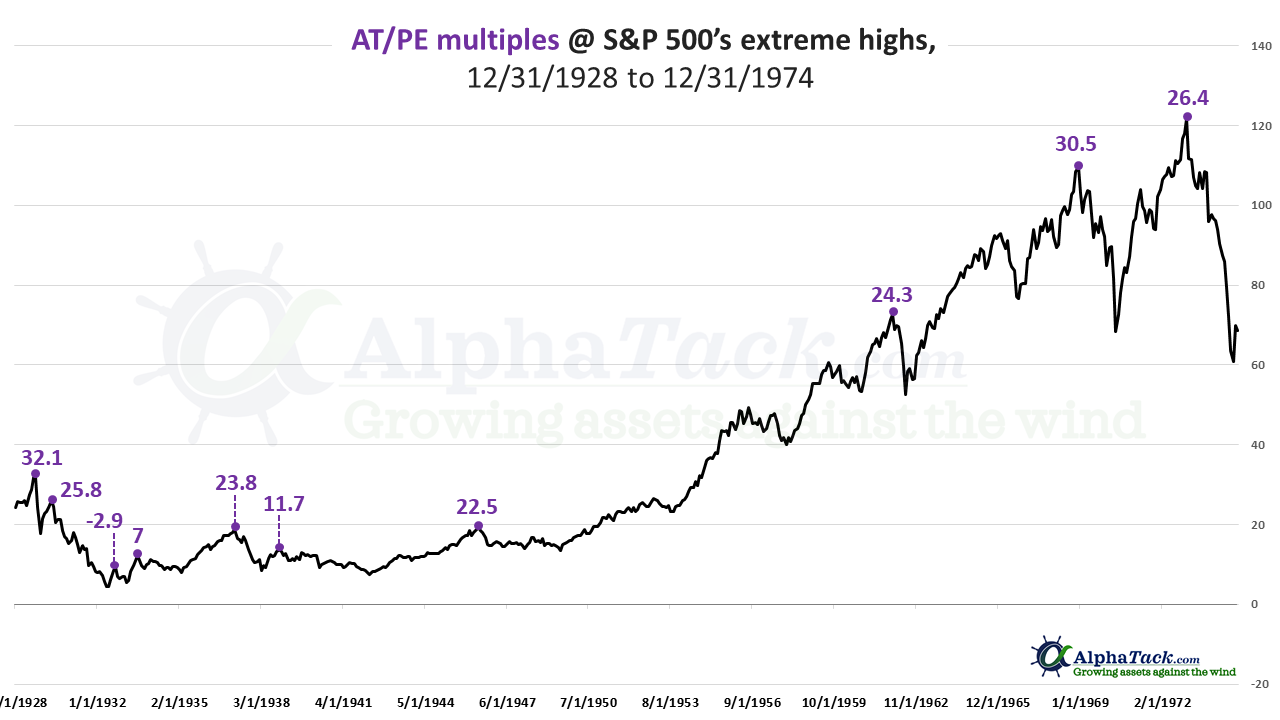 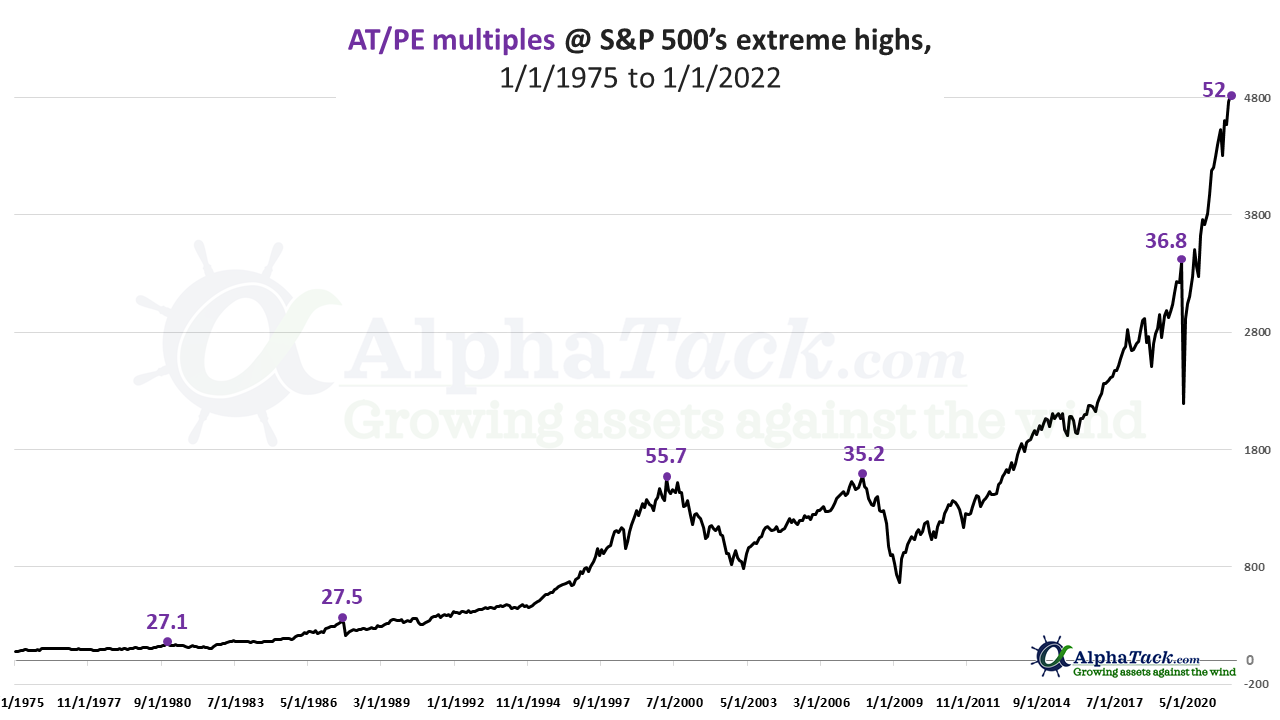 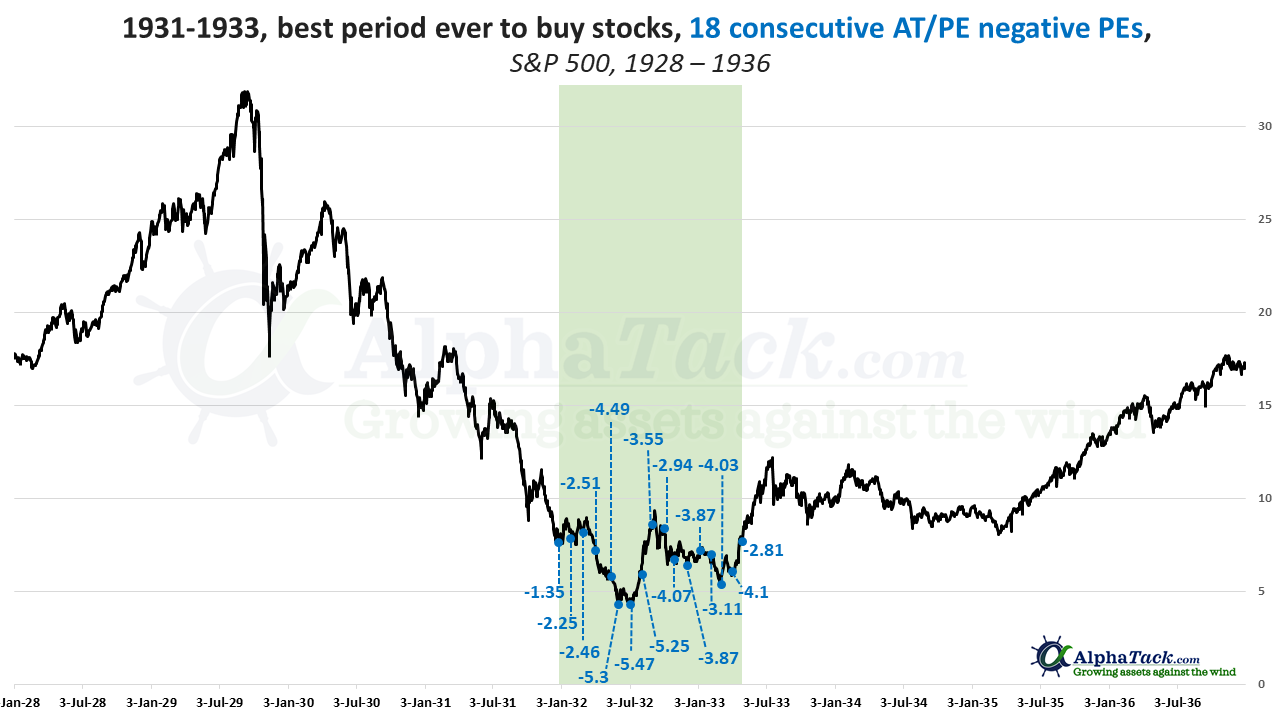 The chart below depicts that had one invested in November 1931, the start of the consecutive negative PEs period, and held to December 1936, the S&P 500 increased by 100%. 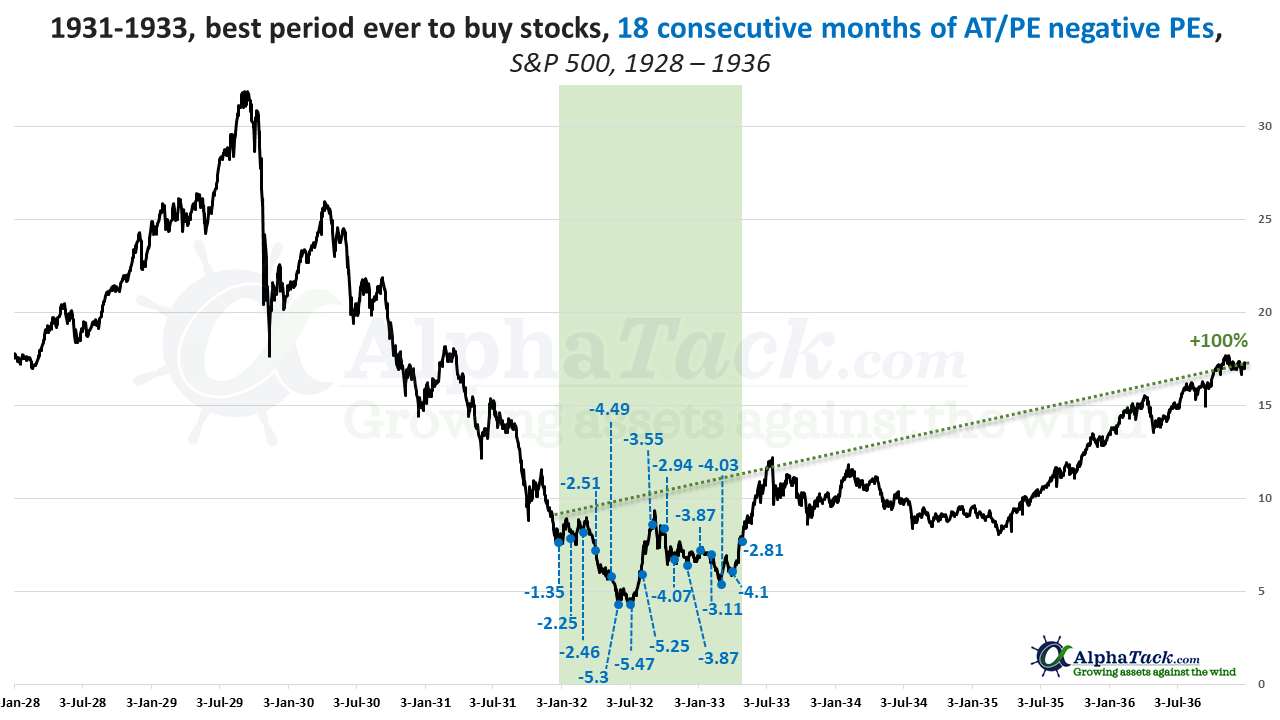 The chart below depicts that had one invested at the S&P 500’s low for the 20th Century, June 1932 during the negative PE Multiples period, and sold in December 1936, the increase was 293%.

The table below depicts the five highest five multiples for each of the AT/PE, Shiller and Basic multiples which coincided at a qualifying extreme S&P 500 high from 1929 to 2022.  For those highs which were shared, the AT/PE’s multiples were the highest.  The five highest multiples for ATPE and Shiller were the same.  However, they had different rankings.  The Basic PE did not have September 1929 or October 2007 in its top five.  The Basic’s 4th highest PE multiple of 26.27 occurred in July 1933, during the best period ever to buy the S&P 500.  For July 1933, the AT/PE was 7.08 and the Shiller PE was 13.75.

The 41.9% and 45.6% declines for the S&P 500 based on the targets of the AT/PE and Shiller PE multiples in the above table are in the same ball park as the S&P 500’s 47% minimum decline for all of its prior secular bears in the table below.

The statistics in the above table, findings from my research of the S&P 500’s PE multiples and Consumer Price Index’s monthly inflation and deflation readings from 1920 to 2022, provide the rationale for the probability being high that the S&P 500 will decline by a minimum of 41.9% at the low for the secular bear market which began on January 4, 2022.  The S&P 500 is also not likely to exceed its all-time high of 4818.62 until 2030 at the earliest since the minimum duration of secular bears since 1929 is 9 years.  A secular bear investing strategy is highly recommended.

To learn why secular bears are so dangerous and the investment strategies to deploy for a secular bear view videos below and read “Bear Market Phases Are Like ‘The Revenant”, by Lance Roberts.

All investors should immediately begin to prepare for extreme U.S. stock market volatility, which is inevitable, by doing the following:

For more information about the BBT, track record updates and how to get access enter email address below.

Never more salient and urgent than today, the AlphaTack.com slogan “Growing Assets Against the Wind”… reflects the wisdom inherent in our philosophy.

The chart below depicts the performance of AlphaTack’s Bull & Bear Tracker, which gained 232% vs. 60% for the S&P 500 from March 2018 to March 2022. The Bull & Bear Tracker is an ideal secular bear market investment vehicle since it fully leverages extreme volatility. The three yellow shaded areas on the chart depict the algorithm’s gains vs. the S&P 500’s declines for the 2018, 2020, and 2022 volatile periods. 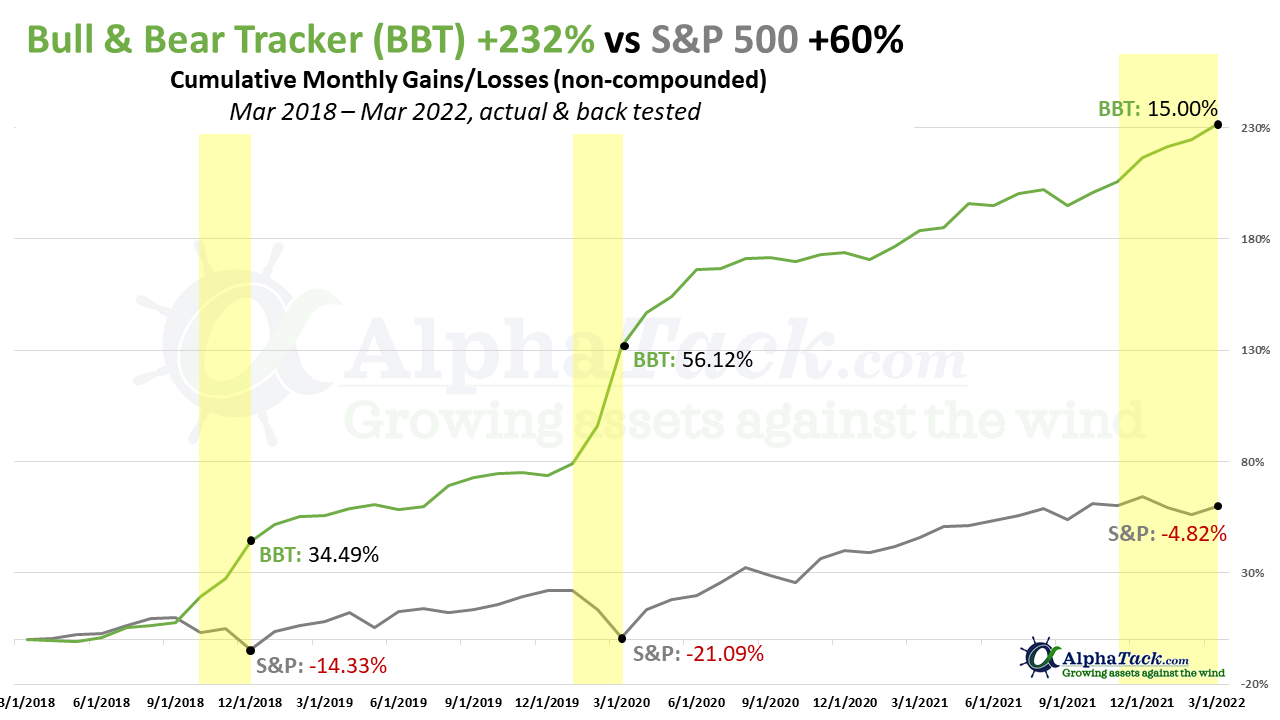 To View The Latest Updates For The BBT, Click Button Below

Finally, my “Acceleration to Digital Economy; why Stock Indices quickly reached new all-time highs after 2020 crash” article is highly recommended.  It provides the rationale for why the 2020 crash proved to be a dip buying opportunity which capitalized on the leading digital and tech companies including Apple, Amazon, Facebook, Google, Microsoft and Netflix being undervalued.  However, those who deployed the dip buying or ride-out-the- storm strategies during 2018 and 2020 periods of volatility and who believe that the S&P 500 will quickly recover its January 2022 high, are in for a rude awakening. 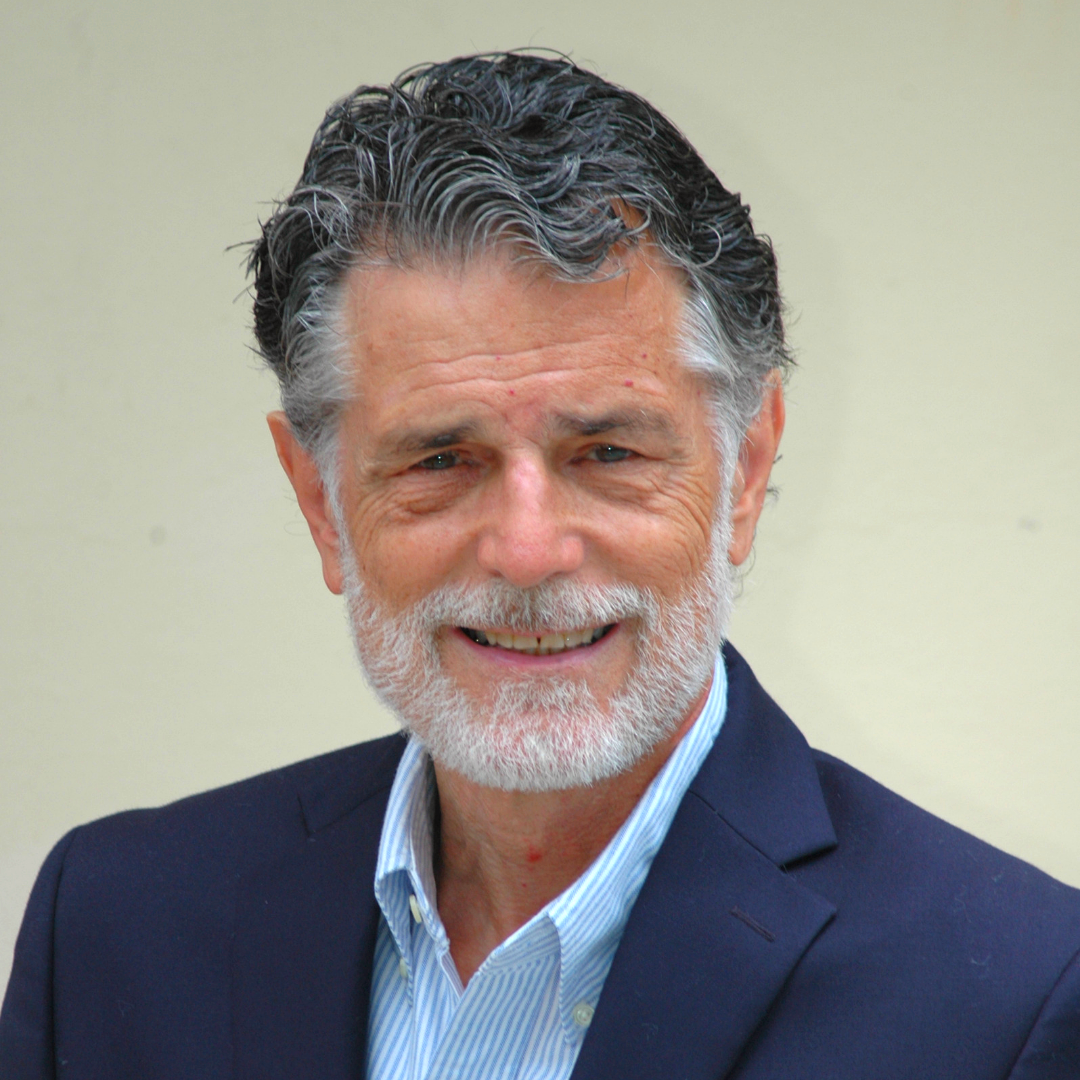 Michael Markowski, a 46-year financial markets veteran, is the Director of Strategies for AlphaTack, whose slogan is “growing assets against the wind”.  He conducts empirical research of the past, which he then utilizes to develop algorithms to predict the future.  His research of Enron’s Financial Statements after its infamous bankruptcy led to the development of a Cash Flow Statement algorithm.  The algorithm was utilized to predict a “day of reckoning” for Lehman, Bear Stearns, Merrill Lynch, Morgan Stanley and Goldman Sachs in a September 2007, Equities Magazine article.   Michael’s research of prior market crashes led to the development of the Bull & Bear Tracker (BBT) algorithm.  From 2018 to 2022, the BBT gained 177% vs. the S&P 500’s 50%.  His predictions of all periods of heightened market volatility from 2008 to 2022 and that  S&P 500 at March 23, 2020 had reached its bottom which was exact are media verifiable.