The mystery of why the stock market behaved differently when compared to other major crises which had previously occurred has been solved.  The US’s major market indices surprised the majority of all investors when they reached new highs in 2020 instead of continuing to decline after they had declined by 34% from their February 2020 highs to their March 2020 lows.  The chart below containing the Nasdaq, S&P 500 and Dow Jones indices depicts that all three reached all-time highs by end of 2020 after crashing to lows in March 2020. 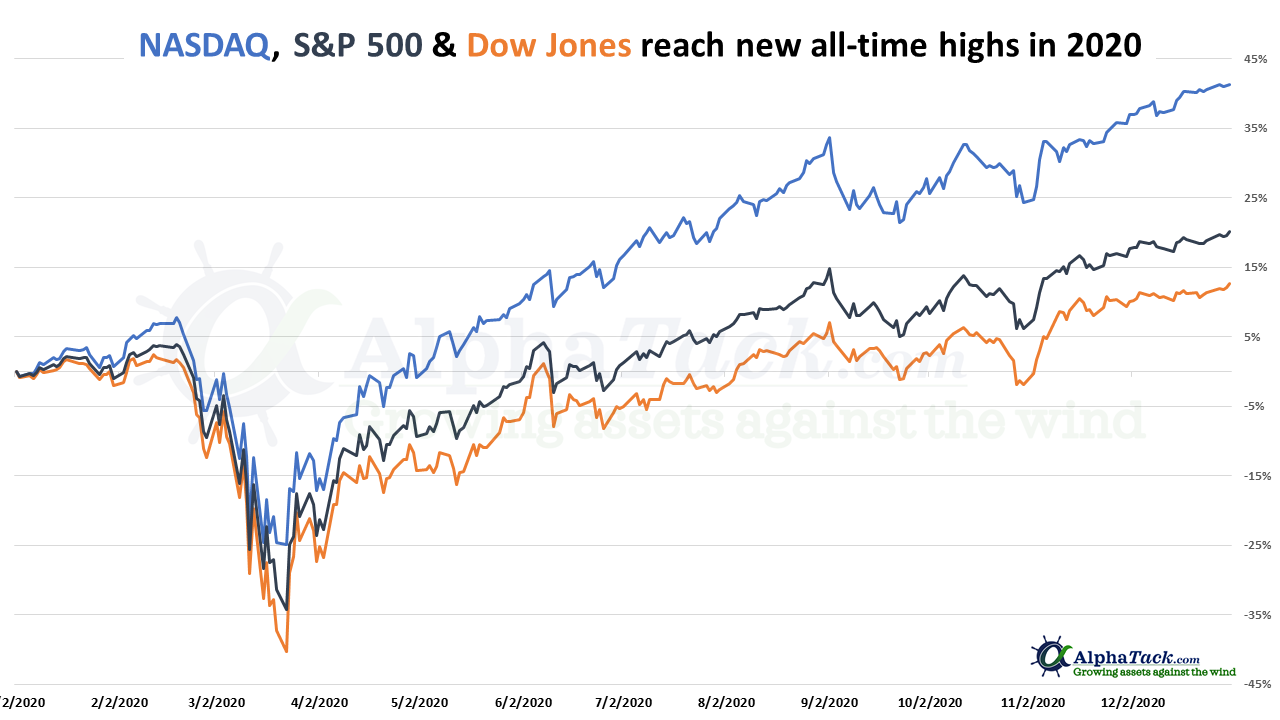 The primary reason for why the market recovered was not the Federal Reserve and the trillions of dollars of government stimulus provided to the US economy.  Instead, the indices reaching new highs was due to the pandemic accelerating the transformation of the global economy from brick and mortar to digital.  The pandemic changed the behavior of consumers and accelerated the amount of goods which are purchased online.  See “There are only a few moments in life when buying habits change, and a pandemic is one of them” by Mark Bain, 08/08/20.

Amazon is the poster child for the digital economy.  It is the pandemic’s primary beneficiary since it has 75 million items listed on its website.   The chart below of the Dow Jones Index, Amazon and Wal-Mart depicts that the share prices of all three had the same trajectory (see yellow shaded area) for 2017. 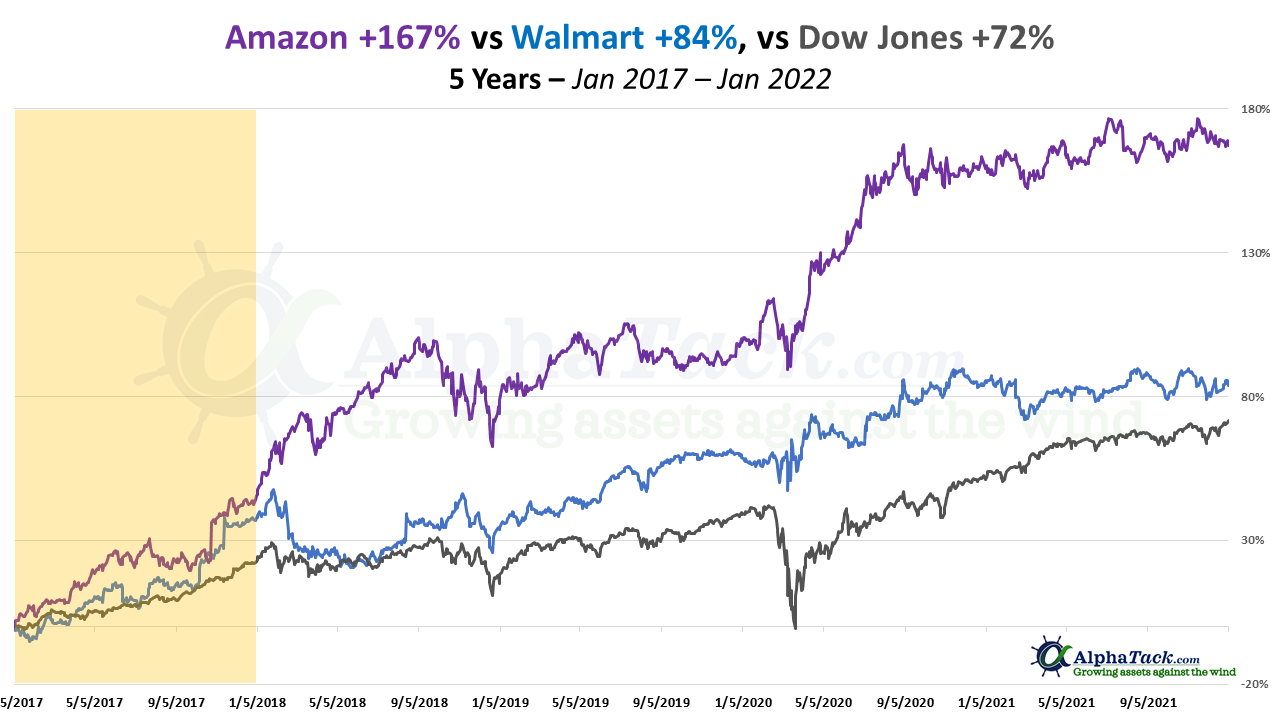 The Amazon share price chart below depicts that the US economy’s transformation to digital began to occur in 2018 when Amazon’s share price gapped higher and then maintained the same trajectory as the Dow Jones Industrial’s index and Wal-Mart’s share price (see green shaded area). 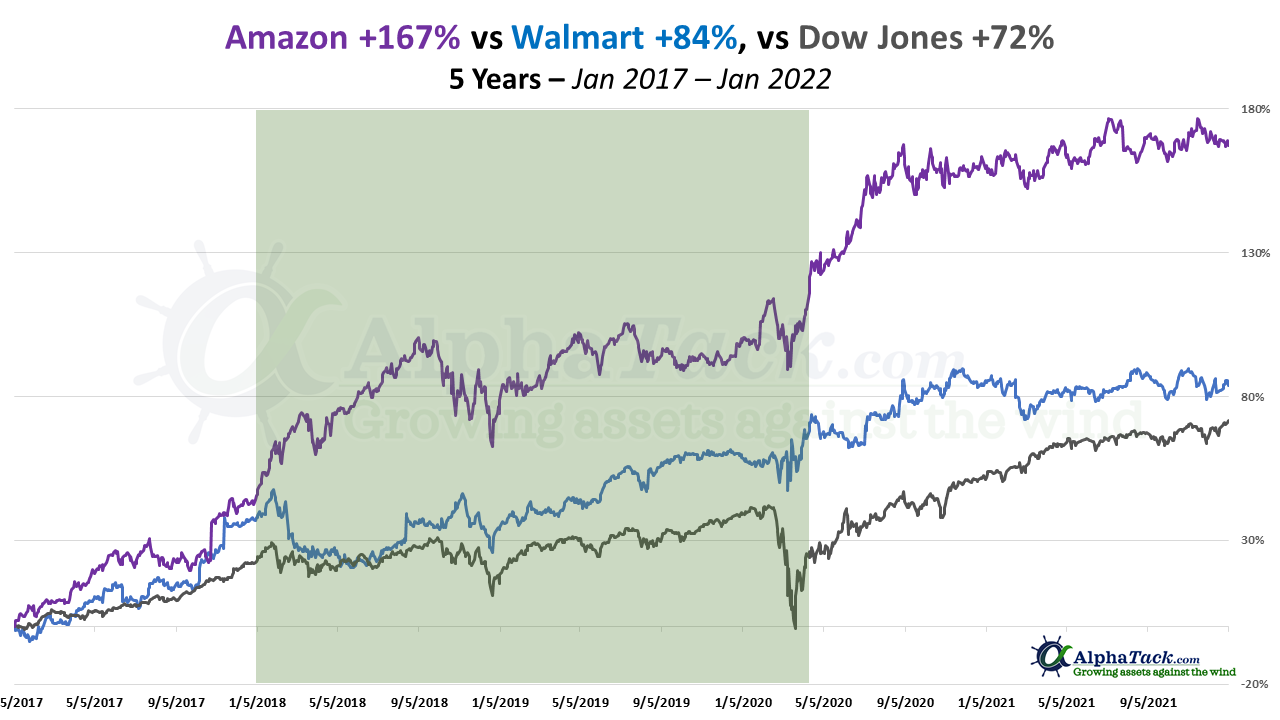 The chart below depicts that Amazon’s share price in June 2020 gapped up again and has since maintained the same trajectory as 2017, 2018 and 2019 (see blue shaded area). 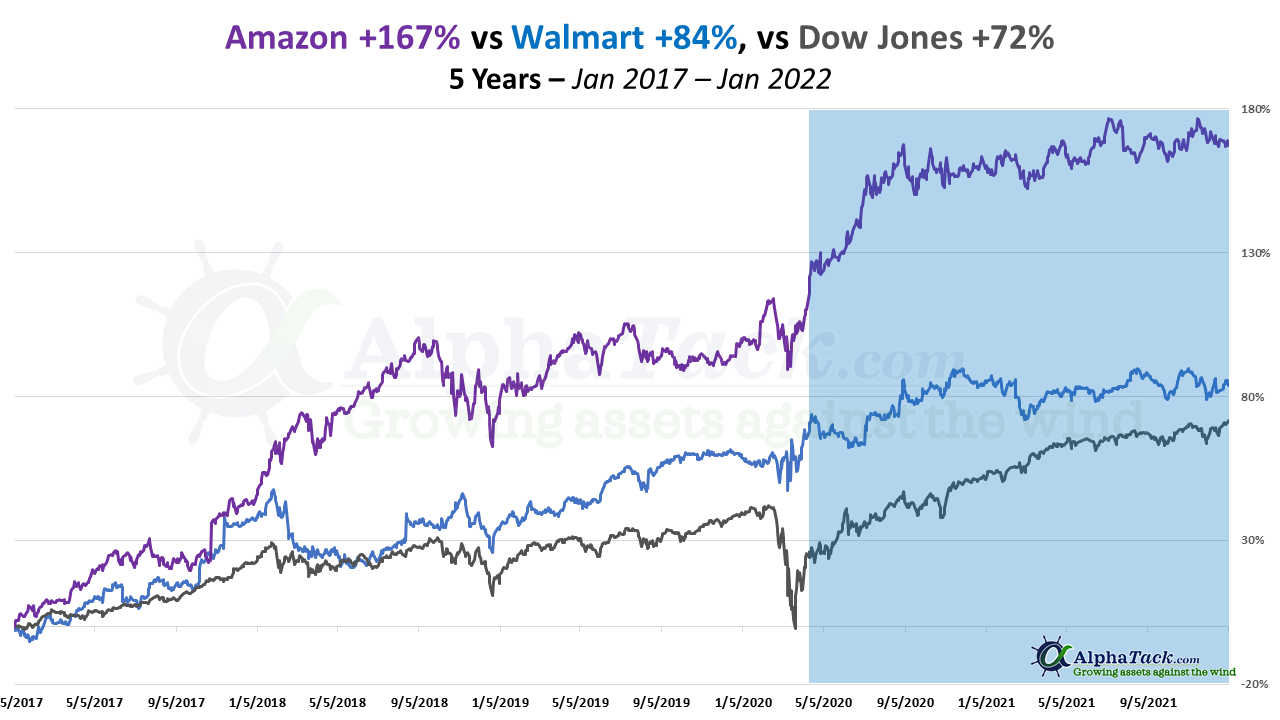 The chart below depicts the performance of the three major US stock indices from January 2020 to January 2022.   The reason why the NASDAQ outperformed the other two is because the majority of its members are technology companies who have been the primary beneficiaries of the acceleration of the brick and mortar to digital transformation.   The S&P 500 outperformed the Dow since its members include all five of the largest capitalization technology companies including Facebook/Meta, Amazon, Alphabet/Google, Microsoft and Apple.   As of August 2021, the five largest technology companies represented 19% of the S&P 500.  The Dow only has two of the five largest, Apple and Microsoft in its index. 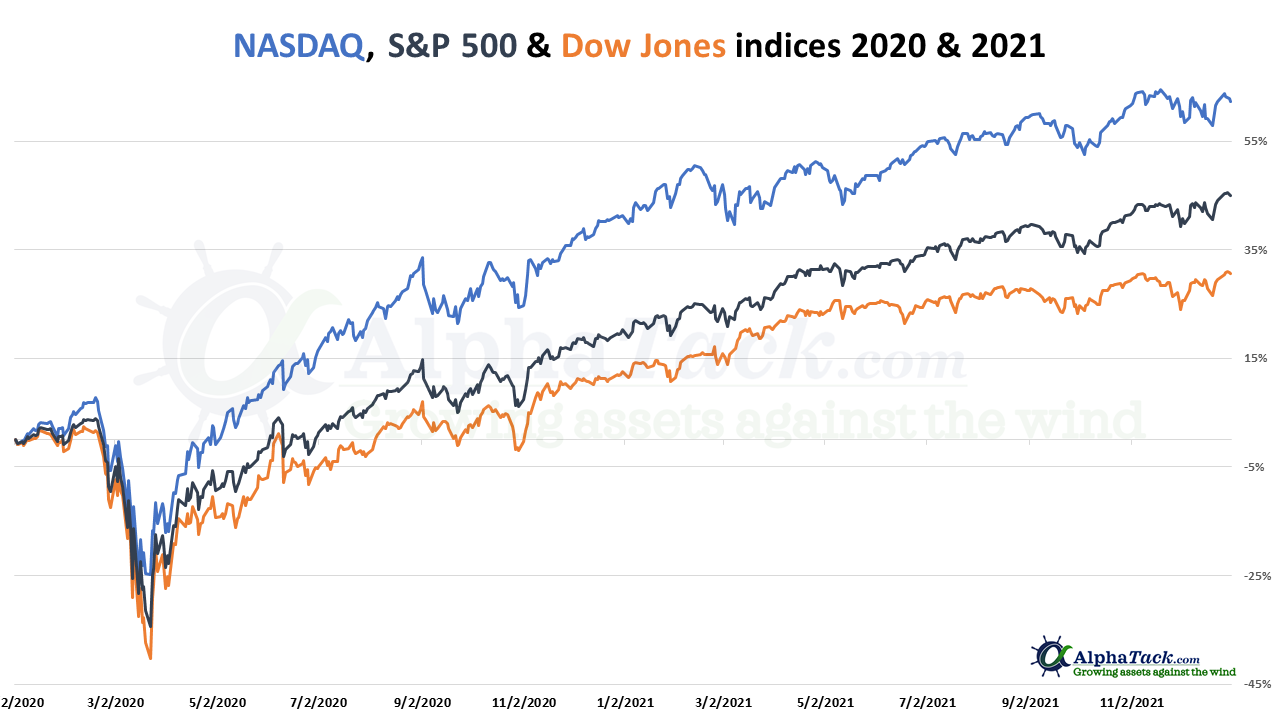 When market historians look back 100 years from now, 2020 will be acknowledged as the pivotal year in which the global economy completed its transformation to digital from physical or brick and mortar.   A pandemic being the reason for 2020 being the pivotal year for the transformation will receive little or any fanfare.  To summarize, it should not be expected for the next crisis, which hits the US and/or global economy, to have a similar turnout or positive effect on the US and the world’s stock markets.   Had there not been a digital economy to transform to, the probability is high that the ninth secular bear since 1802, and the first since the 2000-2009 secular bear, would have begun.   For all of the secular bear markets since 1802, the Dow Jones index has declined for a minimum of eight years and by 45% from its secular bull peak. 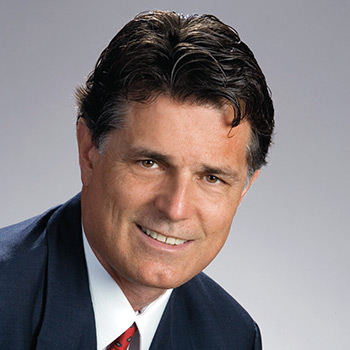