A shift toward private markets is cushioning many of the world’s largest investors from the wreckage wrought by runaway inflation and spiraling interest rates.

The big question now looming over giants from China’s $1.2 trillion sovereign wealth fund to California’s public pension, the largest in the US, is how long those private bets will remain insulated as the economic outlook darkens.

The ten biggest global funds that disclose holdings in non-public markets doubled their combined weightings to assets such as private equity and credit, real estate, infrastructure and hedge funds to about a quarter of their portfolios since the global financial crisis, according to a Bloomberg analysis of investment documents.

The change has come largely at the expense of stocks and bonds for the $7.7 trillion group, which also spans pensions from Japan to Canada and sovereign funds from Norway to the Middle East. The most dramatic shift is by China Investment Corp., which has taken its exposure to private assets and hedge funds from virtually zero in 2008 to almost half its holdings, according to its most recent update.

Private assets can be harder to sell and are subject to less frequent revaluations, but the global pivot has helped offset some ugly losses for these investors. Central banks unwinding years of loose monetary policy have wiped a quarter of value from global stocks and a fifth from bonds in 2022, with the prospect of even more pain ahead. US private equity, meanwhile, is forecast to deliver a greater return than the main asset classes over the next decade, according to data compiled by BlackRock Inc.

“Equities could have more downside from here and bonds may continue to face headwinds from rising rates,” said Kim Bowater, director of consulting at Frontier Advisors, which counsels investors representing nearly $400 billion in assets. “Having more components in the portfolio that behave in different ways can provide strong returns when traditional asset classes aren’t performing.” 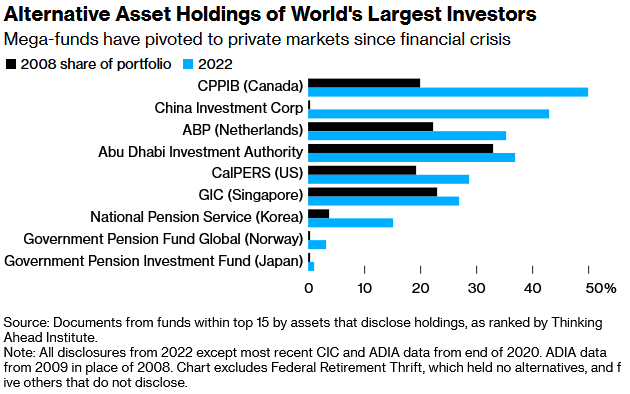 A 7.1% gain for unlisted real estate helped Norway’s sovereign wealth fund limit its drop to 14.4% in the first half of this year. By comparison, global equities slumped 21% over the period and bonds fell 14%. The National Pension Service of Korea’s alternatives portfolio jumped 7.3%, reducing its overall loss to 8%.

Japan’s mammoth Government Pension Investment Fund saw alternative investments return 21.4% in the year to the end of March, the most recent period of disclosed performance, four times as much as the broader portfolio.

The funds analyzed by Bloomberg came from a list of the largest investors compiled in November by the Thinking Ahead Institute, a trade body representing asset owners.

The top end of allocation ranges were used where no specific number was listed. One of the ten funds examined by Bloomberg, the Federal Retirement Thrift, held no alternatives through the period.

Still, outperformance is no sure bet. The cost of debt used to finance large buyouts has surged as rates creep higher. Unlisted assets are also rarely valued — a process known as “marking to market” — which can make them appear artificially attractive.

“The fact private equity doesn’t mark-to-market covers up the problems,” said David Elms, head of diversified alternatives for Janus Henderson Investors. “Markets are continually down. It will have to flow through to valuations.”

Harvard University’s endowment also offered words of caution, even as private assets helped it curb losses during the most recent academic year. Investors in this area have done well but it “may indicate that private managers have not yet marked their portfolios to reflect general market conditions,” said N.P. “Narv” Narvekar, Harvard Management Co.’s chief executive officer.

Yet assets like toll roads and airports can adjust prices with relative ease, providing an attractive hedge against inflation. A global index of listed infrastructure companies — a rough proxy for their private peers – has suffered about half the losses of global stocks this year as the broader market crumbled.

China Investment Corp.’s private deals have included a Turkish port and a fund launched with Goldman Sachs Group Inc. to invest in private US businesses. Norway’s $1.1 trillion sovereign fund is barred from private equity but has built stakes in renewable infrastructure that includes one of the world’s largest wind farms.

Global macro hedge funds, which bet on the impact of political and economic events, are also faring well. A monthly index compiled by Credit Suisse Group AG tracking the strategy has jumped more than a fifth this year through August.

“There’s been an incredible enthusiasm for private market assets, in particular private equity,” said Ben Samild, the fund’s deputy chief investment officer. “The core factor that drives returns is there is a potential for a bit more excess return.”

That said, the structural shift to private assets that trade infrequently can also trigger severe, unintended consequences for markets. Investors are compelled to sell down their most liquid holdings – typically stocks and bonds – in times of stress, adding extra selling pressure on listed markets while unlisted assets are insulated.

This dynamic played out last month when British pension funds narrowly averted catastrophe. As the value of UK government debt fell alongside a controversial fiscal plan, the pensions were required to sell more of the bonds to stump up collateral to support derivatives positions. That fueled a gilt market rout that forced the Bank of England to unveil an emergency bond-buying package.

Investors are on alert. The risks of similar flare-ups could become even more extreme given the outlook for tighter financial conditions, war in Europe and sluggish growth in the world’s largest economies.

“Part of the problem is the fundamental issues of monetary authorities needing to rein in a wage-price spiral. Then there’s the Russia-Ukraine issue and all its impacts,” said Mercer’s Nuzum. “This year, we’re nine months in and it’s still looking ugly.”

— With assistance by Kyungji Cho, Takashi Umekawa and Matthew Burgess