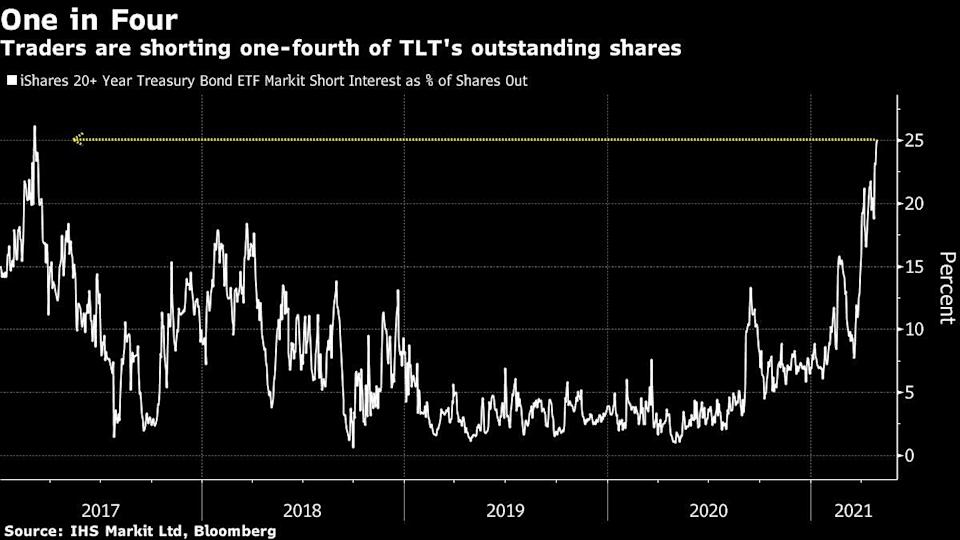 As the U.S. economic rebound continues to dazzle, the mood music in the world’s biggest bond market is getting darker.

Short interest in the $12 billion iShares 20+ Year Treasury Bond exchange-traded fund (ticker TLT) now clocks in at 25% of shares outstanding, the highest since early 2017, according to data from IHS Markit Ltd. Meanwhile, investors are ditching the ETF in droves: TLT has posted outflows every day so far this week, putting the fund on track for weekly withdrawals of over $1 billion — the worst stretch since November, Bloomberg data show.

After a lull, the rise in Treasury yields resumed this week as inflation expectations hit multi-year highs. Exacerbating matters was the Federal Reserve’s April policy meeting, where Chairman Jerome Powell stressed that the central bank views any jump in price pressures as fleeting and it won’t be dialing back crisis-level monetary support any time soon. That’s given the green light for long-dated Treasuries to sell off, according to Richard Bernstein Advisors LLC.

“What they’re saying is, we want inflation and growth to run sizzling hot. We aren’t worried about inflation because we can deal with that if we have to,” said Michael Contopoulos, the firm’s director of fixed income and portfolio manager. “So it’s a free pass to inflationary pressures and pressure on the long end.”

TLT surged 16% in 2020 as the coronavirus pandemic upended global markets, but has since given back most of those gains. The ETF has slumped 12% so far this year as the U.S. vaccine rollout and economic reopening boost expectations for a jump in inflation, which could eat into fixed-income returns.

Flows into funds with heavy duration — or sensitivity to interest-rate changes — have dried up as a result, while investors pour billions into ETFs focused on shorter-dated Treasuries. In particular, five-year notes look attractive to offset equity downside should risk appetite sour, since the tenor has cheapened as traders have priced in Fed rate hikes, in the eyes of Mizuho International Plc.’s Peter Chatwell.

“For those looking at TLT as an equity downside hedge, the belly of the curve can now serve this purpose,” Chatwell, head of multi-asset strategy, said. “If there was to be a macro problem, these hikes would be quickly priced out, and the five-year would generate a capital gain.”

The post “One in Four Shares in $12 Billion Bond ETF Are Now Sold Short” first appeared on April 30th, 2021 on Bloomberg.com