Over the weekend, in Morgan Stanley’s Sunday Start note, the bank’s in-house permabear Mike Wilson, previewed the topic of his weekly fire and brimstone sermon, which ironically was fire and ice, part 2, and his justification for why stocks are going far lower: his view that “this this time the decline in stocks will come mostly via lower earnings (and a higher equity risk premium) rather than higher rates” adding that the bank’s leading earnings models are all flashing red for the S&P 500, “and we have high confidence that the decline in NTM S&P 500 EPS forecasts is far from over.”

Well, judging by today’s aggressive ERP expansion which saw all asset slump, Wilson was right again (and as usual miles ahead of the consensus). But just so Wall Street is up to speed with his latest worldview, Wilson spends much of his latest weekly note laying out his new concept, writing that while “fire and Ice” – Wilson’s framework which defined much of the past year –  has proven to be an effective way to describe the first half of this year – as Fed tightening in response to historically high inflation, the Fire, has weighed heavily on valuations for all asset markets while growth has also disappointed…the Ice – he writes that “part 2 will turn out to be more Icy than Fiery as slowing growth becomes the bigger concern for stocks, rather than inflation and the Fed.“

Here are some more details on how Wilson sees the transition from part 1 to part 2 of “fire and ice”:

At the risk of stating the obvious, 2022 has been a challenging year for stock investors of all stripes. The Russell 3000 is down approximately 18% (total return) year to date (YTD): and while Russell 3000 Growth has underperformed significantly (-24%), it’s been no picnic for value investors either (-11%). Clearly, the relative value trade of value over growth has worked well this year, but we note it’s mostly been due to Energy’s outperformance combined with defensive cohorts, rather than cyclicals like Financials. In fact, only 2 sectors, Energy and Utilities, are up in absolute terms this year while just 24% of all stocks in the Russell 3000 are in positive territory. To put that into context, in 2008, 48% of Russell 3000 stocks were up on the year as we entered the month of September. Suffice it to say, this year has been historically bad for stocks in terms of both price and breadth, but that is not a sufficient reason to be bullish. We think that poor breadth is indicative of more challenges to come on the growth side of the equation, which we address in our note today. While some have recently argued the breadth thrust off the June lows is a sign of better times ahead, we firmly disagree as our top down earnings work does not support such a conclusion. Meanwhile, that breadth thrust is losing altitude quickly and looks vulnerable to taking out the 50-day moving average, something it did not do off the March 2020 lows. Let the debate begin.

Of course, as bad as it’s been for stocks, it’s been even worse for bonds on a risk-adjusted basis: 20-year Treasury bonds are down 24% YTD and the Barclay’s Agg. Index is off by 11%.

Finally, commodities have been a mixed bag, too, with most commodities down on the year despite heightened inflationary concerns. To wit, the CRB RIND index, which measures the spot prices of a wide range of commodities, is down 7% YTD. Cash, on the other hand, is no longer trash, especially if one has taken advantage of the higher front-end rates. Interestingly, most of the damage for bonds was front end loaded as the Fed made its pivot clear in January.

Wilson next reminds readers that he turned more positive on bonds versus stocks back in April, and while since then bonds have outperformed modestly, he argues that they now appear poised to see further outperformance technically and fundamentally if the second half brings more concern about growth rather than inflation as we expect. Outside the US, the picture is even clearer with bonds having outperformed stocks since June of 2021 with the global economy in far worse shape than the US. 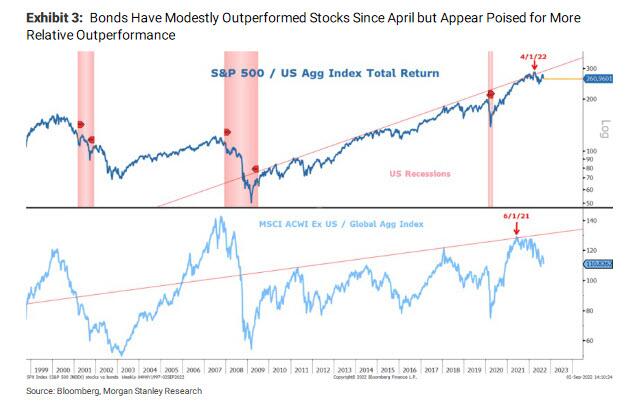 Next, Wilson extends on what he wrote over the weekend, and notes that while the June low for stocks and bonds was dramatic, he has been consistently in the camp that it wasn’t “THE low” for the S&P 500 in this bear market, but having said that, Wilson is more confident it was the low for long-term Treasuries for this cyclical bear market in view of the Fed’s aggressive action that has yet to fully play out in the real economy (well, maybe not, with 10Y yields soaring as we type this and threatening to break above the YTD highs). The MS strategist concedes that it may also have been the low for the average stock, given how poor the breadth was at that time, and the magnitude of the decline in certain stocks. His more pessimistic view on the S&P 500 index, meanwhile, is based on analysis that indicates all of the 30% de-rating in the forward S&P 500 P/E that occurred from December to June was due to higher rates: “we know this because the equity risk premium (ERP) was flat during this period. Meanwhile, forward NTM EPS estimates for the S&P 500 have come down by only ~1.5% and P/Es are now ~8% higher. With rates now ~30bp below the June highs, the ERP has fallen once again, to just ~285bp. This makes little sense, particularly given the significant slowdown in earnings we think is still to come.” 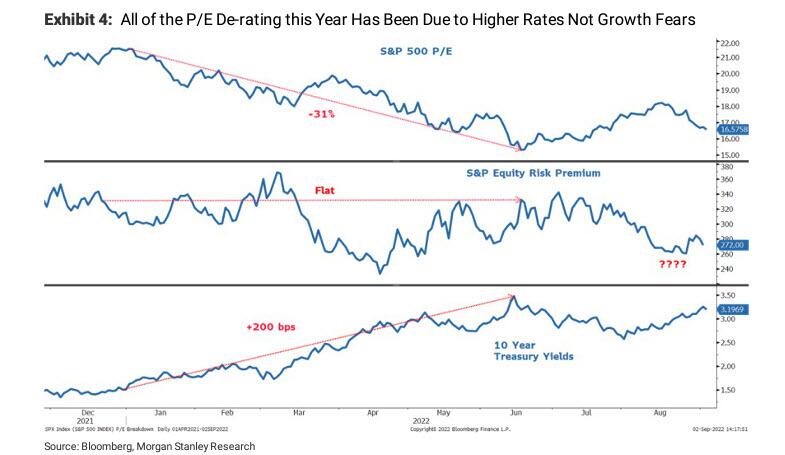 And so, with the Fed dashing hopes for a dovish pivot (at least until futures tumble another 10%), Wilson thinks that asset markets may be entering fire and ice part two. In contrast with part one, this time the MS strategist contends that the decline in stocks should come mostly via a higher ERP and lower earnings rather than higher rates.

Meanwhile, the bank’s earnings models are all flashing red for the S&P 500, and Wilson is highly confident that the decline in NTM S&P 500 EPS forecasts is far from over. In short, Wilson writes that “part two will be more icy than fiery, the opposite of 1H22. That’s not to say rates don’t matter – they do – and we expect bonds to perform better than stocks in this icier scenario.”

What about the timing on Wilson’s “icy” forecast? Well, as the weather turns appropriately chilly this fall, so should growth – he writes – which could weigh mightily on stocks given the paltry ERP investors are getting paid to take this risk.

And just to confirm his renewed bearish fervor, today Wilson revised his S&P 500 EPS estimates lower, and writes that “while we took our first cut to these numbers in our mid-year outlook, we waited to do the larger downward revision until now in order to better time the actual fall in bottom-up estimates, which drive stock prices. Our experience – i.e., prior mistakes – has taught us that it always takes longer for these cuts to play out than it should given the typical corporate optimism about the future.”

So what are Wilson’s new S&P ESP forecasts following today’s downward revisions which point to continued and increasingly significant EPS growth downside well into 2023? Here is the answer:

The ’22/’23/’24 base case estimates are now 3%/13%/14% below consensus, respectively, and more notably, in Morgan Stanley’s base case, 2023 now marks a modest earnings contraction (-3% year-over-year growth), although Morgan Stanley is still terrified to make a recession its base case scenario (that would scare off too many clients).

The logic here is that nominal top line growth slows, but remains positive (mid-single-digit territory), while margins contract materially (1-1.5% margin compression) driven by sticky cost pressures, particularly on the labor side. The bank’s 2023 bear case EPS is  modestly lower to $190 from $195 – a case which continues to assume an economic recession (consistent with views published in our mid-year outlook), and implies an 11% year-over-year EPS growth contraction. The ’23 bull case EPS forecast also comes down to $234 from $245. In this scenario, nominal top line is slightly better and margin pressure is less significant.

Yet while the bank slashes its EPS forecasts, its price targets set in June do not change, and EPS downside is offset by modest upside in P/E multiple expectations (ye olde goalseeking trick). The good news is that the bank’s new price and multiple expectations
are point in time, June 2023 estimates. By then, Wilson notes, equities will be processing the growth path into 2024 (a  reacceleration), not the decelerating growth path into 2023 that’s in the rear view. As such, Wilson’s call for price downside as a result of declining EPS into mid-2023 – the basis of this note, and a high conviction view – is very much a tactical view (next 3 months). To further reinforce this point, the strategist notes that the market multiple typically troughs when EPS is only a third of the way through its decline (i.e., price front-runs EPS declines).

Putting it all together, Wilson’s base case tactical view remains that fair value price for the S&P 500 is ~3,400, and while he expects that price level to be reached before year end, stocks will then work back toward 3,900 by mid next year (actually they will be much higher as the QE needed to monetize all the energy stimmies will long have been in play by then). As previously noted, Wilson thinks tactical fair value in his bear case (an economic recession) is 3,000, which implies an overshoot to the downside of his June ’23 bear case price target in advance of that date.

Wilson’s bottom line: the next several quarters will end up containing some of the most significant downward revisions to forward EPS forecasts seen in the past several cycles. As for valuation, the Morgan Stanley strategist thinks very little of these revisions have actually been discounted, as evidenced by the still depressed ERP component of the S&P 500 P/E ratio. While that view could be challenged as a subjective one, Wilson is confident that his ERP model suggests it is at least 100bps too low today and probably even more since the US is headed toward a recession (our bear case). That said, the strategist certainly appreciates that “this debate is what makes a market and have no illusion markets can trade more richly than they should for long periods of time.” On that note, he thinks the increased size of QT that is expected to begin this month could play a significant role in changing the market’s view of fair value for the ERP.