Blue Pool Capital has cut all its holdings of publicly traded shares except Blue Owl, focusing instead on unlisted startups.

The investment firm that manages part of Alibaba Group Holding Ltd. co-founder Joe Tsai’s fortune is on a rapid retreat from US stocks as it increasingly focuses on private markets.

Blue Pool Capital has ditched holdings in more than 30 US-listed companies — mostly in the tech sector — since the start of last year. Those include Alphabet Inc., Microsoft Corp. and Twitter Inc., regulatory filings show.

The only US stock it owned as of the end of June was asset manager Blue Owl Capital Inc., though it has since trimmed its stake to 9.8%, with more than a dozen sales reported last month. It previously reported a 14% holding as recently as December.

Blue Pool’s holdings in US equities have slumped

Meantime, Blue Pool has invested in more than 10 unlisted startups globally since early 2021 in sectors including sports, blockchain and health care.

Blue Pool is shifting how it deploys Tsai’s fortune as rising rates, slowing economic growth and widespread inflation pummel the US tech stocks that once made up a major part of the family office’s public portfolio. Many wealthy investors are instead turning to private assets, which aren’t as liquid but have valuations that are typically less susceptible to the market’s twists and turns.

A representative for Hong Kong-based Blue Pool didn’t respond to requests for comment. A Blue Owl spokesman declined to comment. 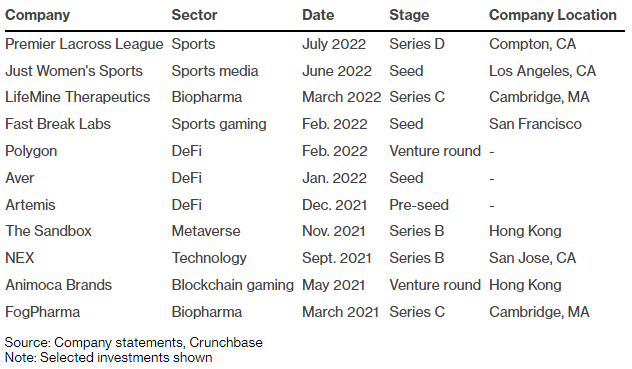 Tsai, 58, is Alibaba’s executive vice chairman and a co-owner of the National Basketball Association’s Brooklyn Nets. He has a net worth of $6 billion, according to the Bloomberg Billionaires Index.

A Canadian citizen born in Taiwan, Tsai quit a $700,000-a-year job at an investment firm to join Alibaba in 1999 for a monthly salary of $50. He soon started raising money from investors worldwide, helping the Chinese e-commerce company become the giant it is now.

Tsai founded Blue Pool with Alexander West in 2004. The firm, which invests in public and private equities, hedge funds and real estate, is led by former Citadel executive Oliver Weisberg, who also oversees its other US sports investments such as the New York Liberty WNBA team and the Los Angeles Football Club. Blue Pool recently paid $188 million for a Manhattan penthouse previously owned by Dan Och, taking out a $71.5 million mortgage from JPMorgan Chase & Co.

Blue Pool first disclosed its total holdings of US equities in early 2018, reporting positions in 34 companies worth $211.5 million at the end of 2017. It still owned stakes in more than 30 firms at the end of March 2021, shortly before Blue Owl became the family office’s biggest listed US asset following a merger between investing giants Owl Rock Capital and Dyal Capital Partners.