My research of the S&P 500’s dividend yields from 1871 to 2022 enabled the discovery that the S&P 500’s real dividend yield (Div/Y) status changes from positive to negative and vice versa being an extremely accurate indicator for when to be in or out of the S&P 500 since the late 19th century. Additional research was conducted to eliminate false positive signal changes which increase asset allocation risk. (View the 4:37-minute video below “AlphaCenturi algorithm has Outperformed S&P 500 since 19th Century“, which explains the proprietary research findings detailed within this article.)

Findings from the research resulted in the development of AlphaCenturi, a rules-based algorithm that has been either in or out of the S&P 500 for 365 days per year since 1871. AlphaCenturi reduces asset-class reallocation volatility. Had it been operational it would have disregarded the Div/Y’s January 1966 and May 2014 sell-the-S&P-500 signal changes. From January to February 1966, and from May to August 2014 the S&P’s dividend yield had reverted to positive. Losses from the false positive signal changes were 3.6% and 5.4% respectively. (Please read the following related article “S&P 500’s Bottoms Occur Only When Generational Investors Buy!”, Markowski, June 4, 2022, AlphaTack.com”, which further explains disciplines practiced by the world’s oldest and largest investors.)

AlphaCenturi, has been either long or short the S&P 500 for 365 days per year from 1871 to 2022. The “Alpha” in the algorithm’s name represents high performance. “Centuri” originated from its outperforming the S&P 500 for the last three centuries. Additionally, there were five periods between 1871 and 2022 when AlphaCenturi was either long or short for at least 100 months. (The table below depicts the five periods.)

Since AlphaCenturi’s long/short signal changes have averaged 3.05 years from 1871 to 2022 a comparative analysis was conducted. The mandate was to determine the returns from selling the S&P 500 short versus investing the sale proceeds into short-term savings accounts, interest-bearing notes, etc., at an average 2.4% per annum interest rate. The gains from following the more conservative interest-bearing instruments instead of shorting the S&P 500 strategy were 101% higher than following a long/short strategy. The chart below depicts that $100 invested into AlphaCenturi’s S&P 500 Long/2.4% strategy in 1871 (hypothetically), increased to $1,079,789.00 in 2021: $100 invested into a buy and hold the S&P 500 strategy, only increased to $96,910.00 for the 147-year period. 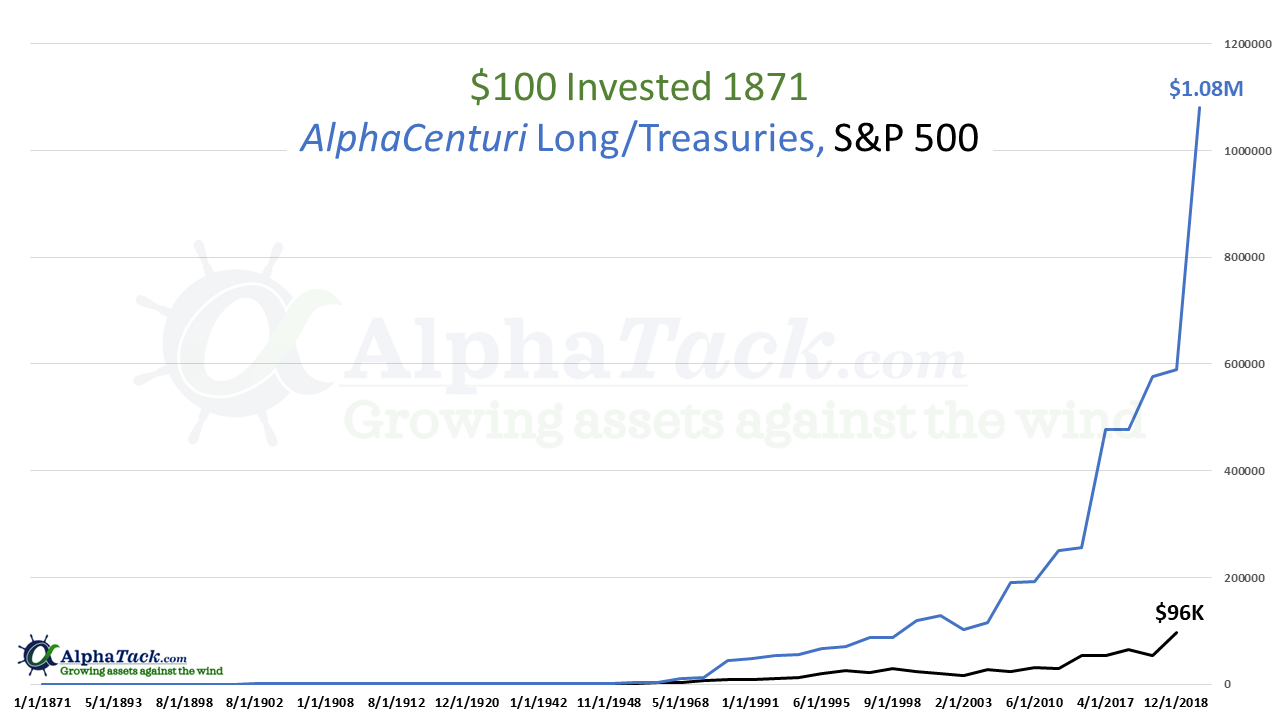 The table below depicts AlphaCenturi’s success ratios for its 49 signal changes that occurred during the 152-year 1817 to 2022 period. (The duration of its average signal was 3.06 years.)

It was an amazingly gratifying, experience to have utilized economic and stock market data from as far back as 1871 to develop AlphaCenturi, which: 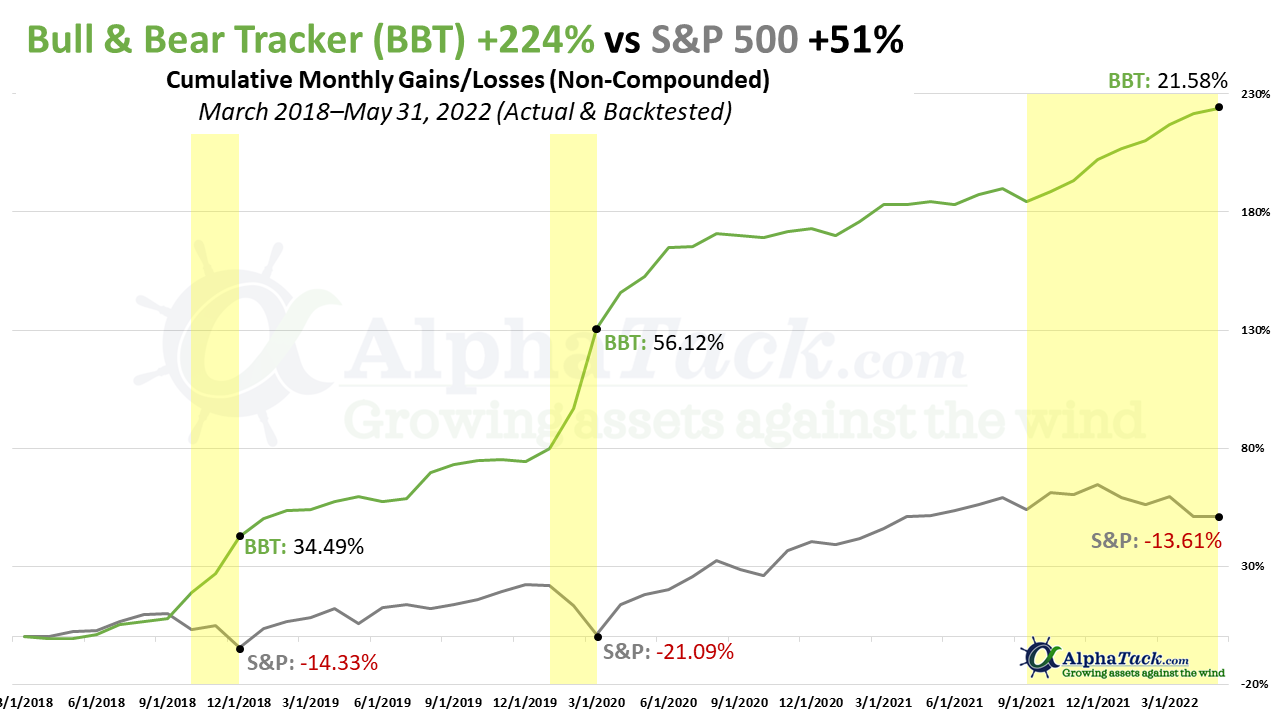 The buy and sell signals for both Bull & Bear Tracker (BBT) and AlphaCenturi are utilized for when investors should be in or out of the S&P 500. Differences between the two algorithms that monitor the S&P, follow:

With algorithms that deliver a one-two punch, AlphaTack.com is the only provider of a comprehensive strategy to enable a portfolio to increase during cyclical and secular bear markets. AlphaCenturi indicates when an investor must be defensive or offensive over the long haul. The Bull & Bear Tracker enables a portfolio to grow by leveraging the short term volatility, which occurs regardless of a market’s macro or long-term direction.

The AlphaCenturi and Bull & Bear Tracker algorithms are exclusively available through AlphaTack.com, a provider of cutting-edge intelligence and proprietary defensive growth strategies to discerning individual and professional investors.

Finally, based upon my research of secular markets, the S&P 500 and the U.S. economy face another risk. The secular bull market that began in 2009, ended when a new secular bear market began on January 4, 2022. This bear will be the cause of a 47% to 85% decline for the S&P 500. The decline ranges are based on S&P 500’s peak to trough declines for all of its secular bear markets since 1929, as depicted in the table below.

To prepare for extreme U.S. stock market volatility, which is inevitable, do the following:

*View the 90/10 Crash Protection video at bottom of the page to understand why
**Available through AlphaTack‘s strategies via referral to advisors and funds.