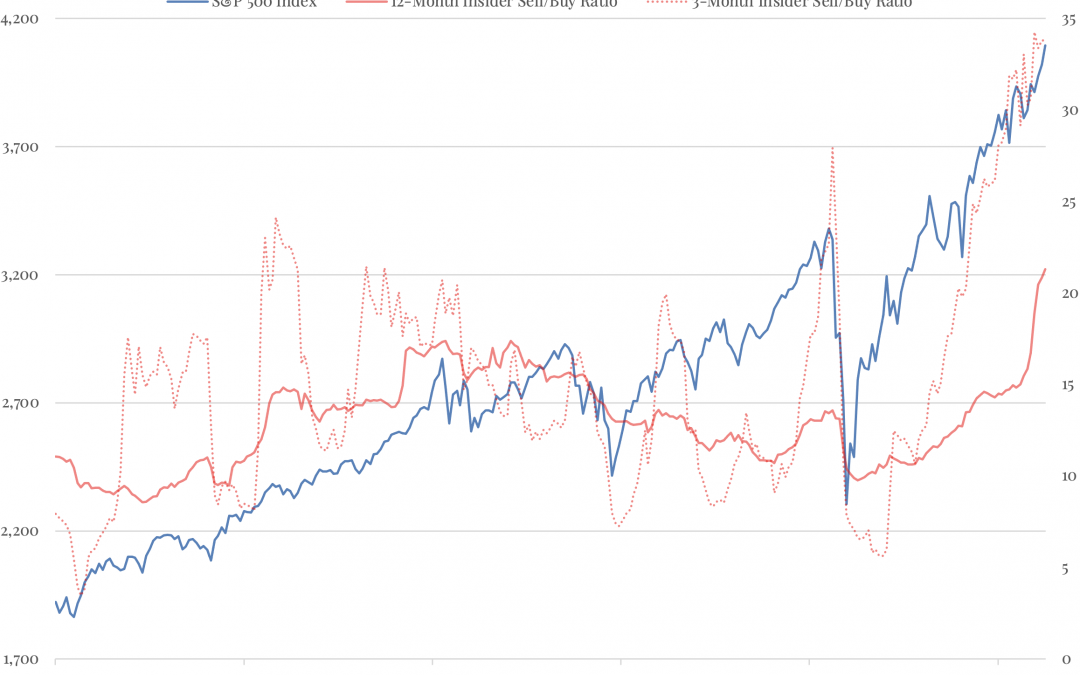 Authored by Jesse Felder via TheFelderReport.com,

The following is an excerpt from a recent Market Comment featured on The Felder Report PREMIUM.

As most readers should be well aware, one of the things I monitor most closely is insider buying and selling. Nobody knows more about the bullish and bearish developments of a business and its valuation relative to those developments than the company’s top executives. Now some believe that, while insider activity may sometimes be a good indication of future price movements in individual stocks, in aggregate it doesn’t have any meaning at all. In addition, many suggest that, while insider buying may be predictive at times, insider selling is not. Both of these positions, however, are contradicted by the data.

As Nejat Seyhun, Professor of Finance at the University of Michigan, has demonstrated in his book, Investment Intelligence From Insider Trading, the aggregate selling-to-buying ratio over certain periods of time has a very good track record at predicting future returns in the stock market. In his words, “Aggregate insider trading predicts aggregate stock returns.” Furthermore, “Aggregate insider trading predicts changes in future economic growth up to two years ahead.” So not only are insiders better market strategists than those on Wall Street, they are also better economists.

This should make intuitive sense. Who has a better read on both the stock market and the economy than the amalgamation of those top executives in the country with the confidence to not merely make a public forecast but actually put their money where their mouths are?

Certainly, we have seen this play out over the past year. The aggregate insider buying just over a year ago has proved very prescient as to the direction of the stock market, the leadership of the rebound in stock prices and the turnaround in the economy so far. However, when we look at the recent data (provided by InsideArbitrage.com), it’s immediately apparent that the top executives (along with directors and 10% shareholders) have rarely been as aggressive in selling, or disinterested in buying, as they are today.

In light of Seyhun’s findings noted above, this relative bearishness on the part of insiders in aggregate would seem to suggest that stock prices are likely to fall short of euphoric expectations over the next year or so. On top of that, the economy could begin to disappoint on a similar time frame, as well. Don’t say they didn’t warn you.

The post “Insiders Are Sending A Pretty Clear Signal About The Stock Market (And The Economy)” first appeared on ZeroHedge.com on April 16th, 2021.